Project Island is a Survival RTS in which the player controls the actions of a stranded salvage crew that has crash landed on a mysterious planet. On this planet, the crew has found the remains of an abandoned research facility. Abandoned biospheres have transformed parts of the otherwise desolate landscape into hostile environments filled with dangerous plants and animals. The crew's escape pod had been damaged, and they cannot call for help. The crew must venture into the unknown in order to find the resources they need to stay alive so they can salvage the parts they need to repair their pod, send a rescue signal, and escape the planet.

This was a different kind of project than what I was used to, since I was elected to be the Game Designer for the game, instead of being a full time Lead Programmer or Programmer. When time allowed, I could do some programming, but my primary responsibilities consisted of design the game, being the creative lead of the project, and coordinating with other team members and department leaders. 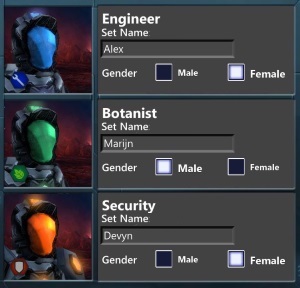 Players must guide a crew of 3 to ensure their survival. Players can change the names of the characters, and can also pick their gender, which changes the voice for the character. The 3 character types that players use are:

Engineer - Has the ability to make unique items, and gets bonus salvage. Upgrades allow for creation of more item types and utility.

Botanist - Is the most skilled at finding food from plant life. Can be Upgraded to grant additional benefits from food, as well as dealing incredible damage to hostile plant life.

Security - Like the name suggests, Security is the most physically adept and has Upgrades geared towards fighting, defense, and scouting.

In order to keep each character alive, the player must maintain three primary "Meters" had to be maintained.

Oxygen - A constantly dwindling resource that could be refilled at the Escape Pod or a Dispenser found in the world. If oxygen ran out, then the crew member's health would begin depleting. The oxygen meter was designed to make players weigh the risk and reward of continuous exploration. Managing the crew's oxygen meant that players had to be more deliberate in each "expedition" they took, while successful exploration ventures became significant accomplishments.

Health - The "final say" as far as character status. If either of the other two meters were empty, then health would be drained as a result. Once a crew member's health reaches zero, they are dead for the rest of the game.

Nourishment - An indication of how well fed a crew member is. If the meter is depleted, then the health of the crew member begins draining. The Nourishment meter is the "spur" that pushes players out from their base and into the unexplored area, since food can only be gathered in the wilderness.
Character Balance Challenges

A significant challenge when creating the character classes was making sure that each one had enticing options for use and upgrades. We had to make sure that each character felt useful, because otherwise they could truly become dead weight in the player's eyes. In addition, we wanted the game to still be beatable, even if the player had lost a crew member.

To ensure there wasn't a dominant strategy of exclusively using and upgrading one character, we determined all of the primary abilities and tasks that the game required, then distributed each ability based on how unique we could make the character. Each character is equipped best to handle a particular meter.

Security is best at handling health, as he can "tank" enemies for the other two crew members, as well as dealing out more damage to end fights faster. Engineer can handle the Oxygen meter by creating oxygen tanks and dispensers, as well as making Probes and Flares for more effective scouting. Botanist can get bonus food from plants, which addresses the Nourishment meter, while also allowing for more use of food as a crafting resource.

Given that crew members can die, we wanted to avoid players feeling doomed due to losing a crew member and feeling that they can do nothing to fill the gap. At the same time, we wanted players to feel that losing a crew member was significant, so that they would value each character and would try to keep them alive. As a result, crew members do have options to help compensate, but their methods were not as powerful in order to make the loss feel significant. When a crew member dies, players were presented with a sort of trade off. With less crew members came less mouths to feed, however, it also meant less hands to explore, craft, fight and gather. In addition to losing stronger unique abilities, the balance of item cost, resource depletion, and enemy strength were tuned to make survival with less characters less effective overall , despite the decrease in resource consumption.

There are two primary resources that players must utilize to survive: Food and Salvage.
Food could naturally be used to replenish crew Nourishment, but it was also a required resource when Crafting or Upgrading. For this reason plays had to weigh the benefits of feeding the crew with acquired food versus potentially getting more value out of Crafting or Upgrading.

Salvage is a resource used exclusively for Crafting and Upgrading. The difference is that crafting consumable items require significantly less Salvage, while Upgrades, which are permanent, require a much larger amount. Players must decide if they should invest larger amounts of resources up front for permanent gains, or build consumables to address more immediate concerns.

A Botanist upgrade that significantly altered certain encounters
Upgrades grant permanent utility improvements to characters at the cost of more significant resource investment. There were two significant challenges when making abilities: Making them balanced and useful from a mechanics standpoint (as discussed when balancing classes), and making them feel so to players.

To make abilities powerful and useful to players, we found that giving players more utility made abilities far more enticing. Players enjoyed having access to new powers that did more to "change the game" by helping them deal with difficult obstacles in ways that were more interesting than something like adding % max health.

Some of the most popular upgrades for each class are as follows.

With Certain Familiarity, encounters that previously costed significant health and time became . Area Analysis was a super expensive Upgrade that revealed the main game objectives on the map if players survived long enough to purchase it, which resulted in much more focused expeditions. Security's Keen Eye improved his vision range significantly, which while basic, was extremely popular because enemies could be seen before ambushing, while the movement speed aspect allowed Security to scout and intercept threats faster. 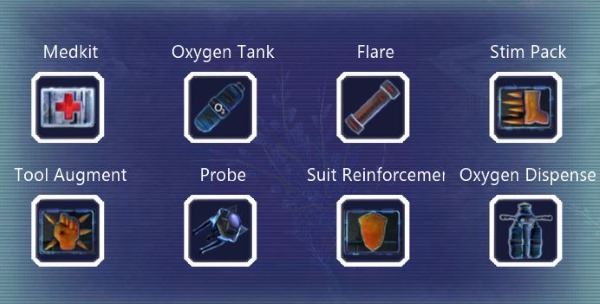 Items served as consumable, immediate benefits. A challenge when making the items was having players . In earlier iterations of the game, we found that players rarely crafted items outside of the bare essentials (usually Medkits or Oxygen Tanks). Part of the reason was that the need for survival was so high that players were not inclined to spend precious resources with "experimentation," even if the item they could craft were super helpful.

To solve the issue, we decided to limited amount of items scattered in the world. Doing so increased the variety of things the player was picking up, and also served as a "demo" for each item. Players enjoyed finding new items and trying them under these circumstances, and were much more inclined to spend resources to make them once they knew what they did.

Enemies were scattered throughout the world in order to pose obstacles that stood between players and resources, and forced them to consider if a fight would be worth it or not. We wanted to make sure that enemies had their own unique feel instead of just being flat stat upgrades compared to each other. To accomplish this task, we paired each enemy with different environments that would enhance the threat level of the enemies.

An aspect of world that interest many types of players and propel them to play and explore is the "lore". Because the setting of our game is an abandoned research facility that seems operational - yet has no sign of human life, it creates a natural curiosity in players to find out what happened. To satisfy that curiosity and to give players another aspect of the game to enjoy, we left several logs written by the facility's researchers. I got to do the writing for several logs and characters in the story, including Eamon Ellis, the disgruntled head of secutiry, and Dr. Joseph Moreau, the head researcher. The two are constantly at odds, and their fight is reflected in each of their logs. As players find more of their writings, they can learn the nature of the conflict between the two.