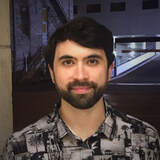 My name is Carlos Gutierrez, I'm from Austin, Texas.

I graduated from The Guildhall at Southern Methodist University in 2014, receiving a Master's of Interactive Technology.

At the Guildhall, I built a strong foundation for advanced game programming and was the creative
lead of a student team of 15 for the capstone project.
My thesis project - Fuzzy Fitness Scoring for Companion AI Strategy Selection - was an exploration
of creating a companion AI that could intelligently and meaningfully assist the player in combat based
​on the situation.

After graduation, I began my professional career at Arkane Studios Austin as an AI/Gameplay Engineer. As I wrote and took ownership of more NPCs and core AI/NPC systems I became a Senior AI/Gameplay Engineer. At Arkane I've drastically increased my experience in all aspects of programming and shipping AAA projects, particularly AI/NPC development, core system development and maintenance, gameplay programming, and collaboration and integration with other departments.

My most recently released professional works are PREY and PREY MOONCRASH.

I have always been interested in Game Programming and Game Design. I enjoy the challenges of both, and I love the satisfaction that comes with solving a difficult problem. I pursue opportunities to create new technology expand the possibilities of game design and development in order to create new and unique styles of games, genres, and gameplay.
Copyright © 2020